Kyiv, Ukraine (CNN)Russian President Vladimir Putin issued a series of threats against Ukraine and Western powers Saturday, as Ukrainian officials accused Russia of shelling evacuation routes out of two battered cities. Ukrainian authorities said thousands of civilians remained trapped in the southeastern cities of Mariupol and Volnovakha and accused Russian forces of breaching an agreement to pause fire to allow safe passage out.Putin, meanwhile, used a meeting with Russian flight crew members at an Aeroflot training center in Moscow, to make his first expansive remarks since the invasion nine days ago.

“The current leadership needs to understand that if they continue doing what they are doing, they put under question the future of Ukrainian statehood,” Putin said. “And if that happens, it will be entirely on their conscience.”

Putin also said Western sanctions were the “equivalent of a declaration of war,” and warned he would consider countries imposing a no-fly zone over Ukraine as “participants in a military conflict.”

President Volodymyr Zelensky and other Ukrainian leaders have repeatedly pleaded with NATO and Western officials to impose a no-fly zone over Ukraine, a move which could prevent Russian forces from carrying out airstrikes against their country.But NATO Secretary General Jens Stoltenberg said on Friday that a no-fly zone is not an option being considered by the alliance.US Secretary of State Antony Blinken said Friday that establishing such a zone could lead to a “full-fledged war in Europe,” but added Washington would continue to work with its allies to provide Ukrainians with the means to defend themselves from Russian aggression.

The Russian Ministry of Defense said earlier Saturday it would stop bombarding Mariupol and Volnovakha, which have endured days of heavy, indiscriminate shelling. Residents there have hunkered down in basements without power and with limited supplies of food and water, volunteers gathering information from the ground told CNN.

Russia squeezes southern Ukraine amid warning ‘worst is yet to come’But just a few hours after the announcement to pause fire, a top regional official accused Russia of breaking its agreement.”Due to the fact that the Russians are not observing the ceasefire regime and continue shelling Mariupol and its outskirts, the evacuation of the population has been postponed for security reasons,” governor of the Donetsk region, Pavlo Kyrylenko, announced on Twitter.Iryna Vereshchuk, the Ukrainian minister of Reintegration of Temporarily Occupied Territories, said Saturday that about 200,000 people were to be evacuated from Mariupol and a further 15,000 from Volnovakha. 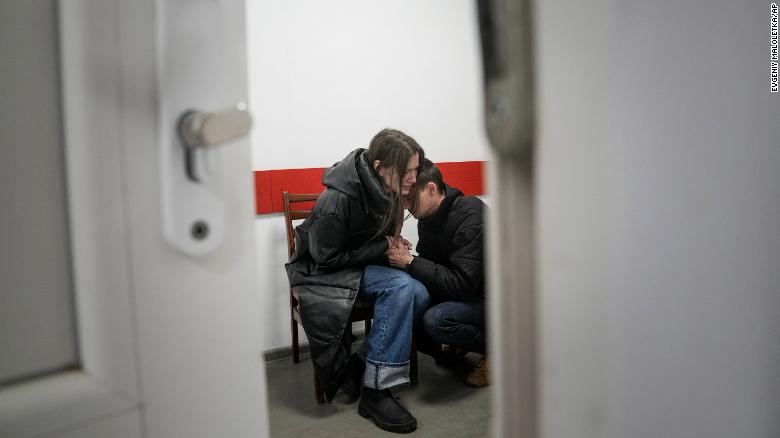 Marina Yatsko — along with her boyfriend, Fedor — rushed to the hospital Friday after her 18-month-old son, Kirill, was wounded in shelling in Mariupol, Ukraine.Kyrylenko said 400 people were evacuated from Volnovakha and surrounding villages on Saturday, adding that while the authorities “intended to evacuate a much larger number of people, the convoy had to stop moving as the Russians resumed the ruthless shelling of Volnovakha and it was extremely dangerous to move there.”Meanwhile, Mariupol Mayor Vadym Boichenko said in a statement that just as the city was ready to begin evacuations of its residents to Zaporizhzhia and Dnipro, Russian forces “began shelling along the corridor, where we were supposed to go.””This morning we received a confirmation from the Russian Federation, from the Ministry of Defense of the Russian Federation, that the corridor from Mariupol to the cities of Zaporizhzhia and the Dnipro is safe. We received a guarantee of ceasefire regime … there is no ceasefire regime now,” he said. “This does not give us a sense of security for going to Zaporizhzhia.”Later Saturday, in a interview on a YouTube channel, Boichenko painted a grim picture of life in the city.Boichenko said the city, with a population of nearly 400,000, had been without power for five days. He said there were no mobile networks, and “since the attack on Mariupol, we lost our reserve water supply, and so we are totally without water now.”He said the “wounded and dead over these past five days number in the dozens. By the eighth day there were hundreds. Now we are already talking about thousands.”He added: “These figures are only going to get worse. But this is the sixth straight day of airstrikes and we are not able to get out to recover the dead.”Later on Saturday, in a statement carried by Russian news agency TASS, General Igor Konashenkov, spokesman for the Russian Defense Ministry, said that “not a single civilian was able to leave Mariupol and Volnovakha along the announced security corridors,” that Russian forces had resumed their offensive, and blamed “the Ukrainian side.”

What is NATO and why hasn’t it imposed a no-fly zone in Ukraine?At the same time, Ukrainians — including children, and elderly men and women — managed to escape Kyiv on Saturday by crossing a damaged bridge on the northwestern outskirts of the capital.The bridge, connecting the suburb of Irpin to central Kyiv, was blown up by Ukrainian forces to prevent Russian forces from using it to enter the city. As a result, civilians fleeing a week of heavy bombardment were forced to scramble over heaped rubble and twisted metal to make their way to the other side. Some appeared exhausted and visibly distressed, struggling to balance as they hauled their bags up the steep slope.

‘There are corpses lying around’

CNN received a written account from a resident of a village near Volnovakha, whose husband has been trying to evacuate people from the city in recent days.

Terminally ill children flee war-torn Kharkiv on makeshift medical train“The situation in the city is very scary,” Marina Gasanova wrote. “There is almost nothing left in the city, something comes in every minute from all sides, it is not clear what … and it is not clear from where it comes. Scary, crazy!” she wrote. “Every minute, every second, everyone is shooting. From all sides. It’s just impossible! There are corpses lying around, torn-off arms, torn-off legs.”Vereshchuk said that according to reports from her country’s military, Russian forces were using the pause in fire to continue their advance.She stressed that the corridors were being used to evacuate civilians, including women and children, and to deliver aid, like medicine and food.”The whole world is watching this. I sincerely hope that such a first step, which I hope will end positively and people will get shelter, but not sit for weeks under the rubble, in basements without water, without communication and without food, will continue,” she said. 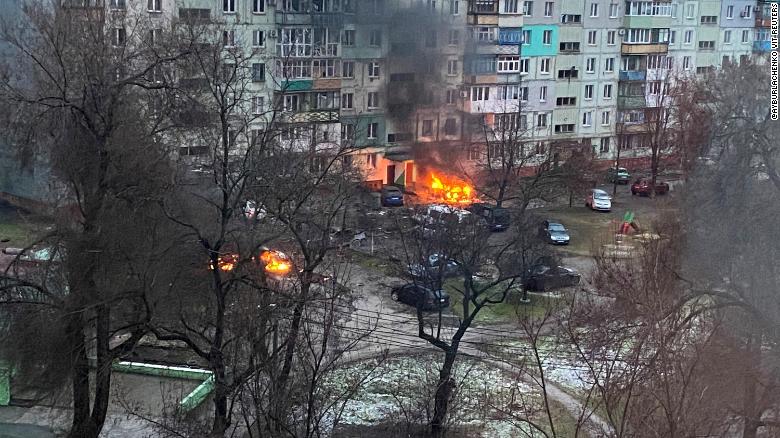 Fire is seen after an attack at a residential area in Mariupol on March 3, 2022.Earlier on Saturday, Zelensky pleaded for the evacuation corridors to work to save people, but he also said that those “who can defend their city must continue to fight.”Doctors Without Borders (MSF) issued a statement on Saturday pleading for the evacuation corridors to remain open. The statement included an account from a MSF staff member in Mariupol, who said the situation in the city was getting desperate.

“We collected snow and rain water yesterday to have some utility water. We tried to get free water today but the queue was huge … multiple grocery stores were destroyed by missiles and the remaining things were taken by people in desperate need,” it read. “Still no power, water, heating and mobile connection. No one heard about any evacuation yet. Pharmacies are out of medicine.” 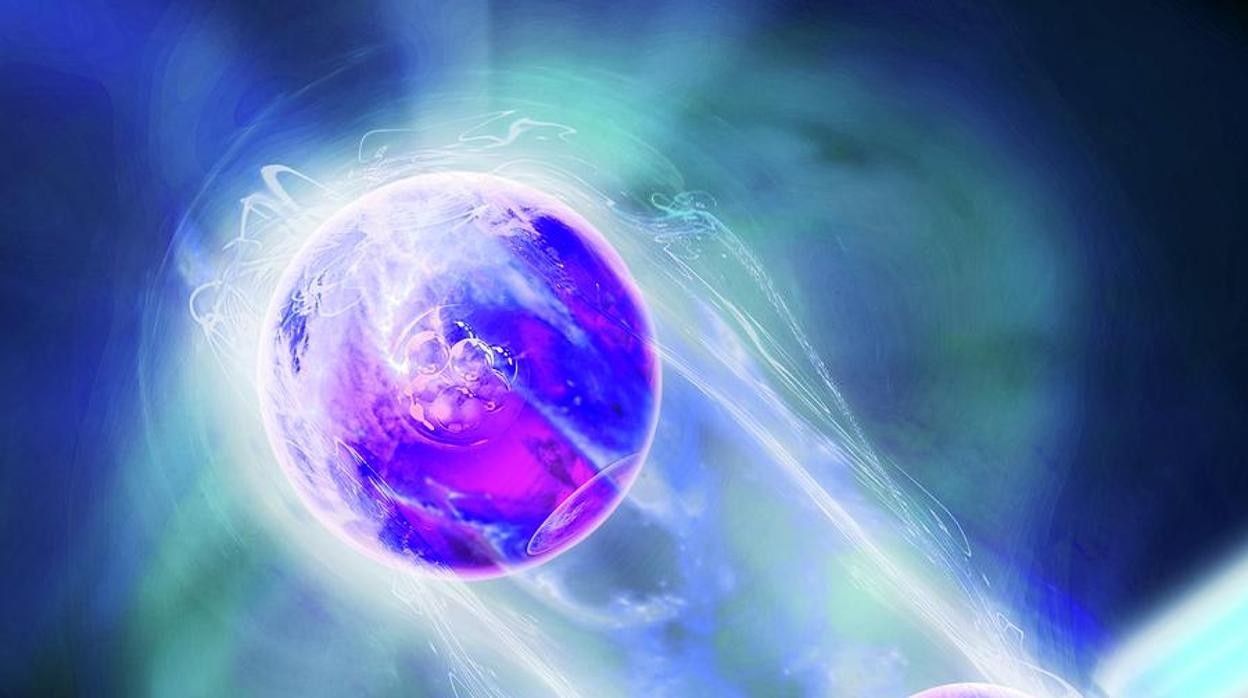